It's good news for the country. 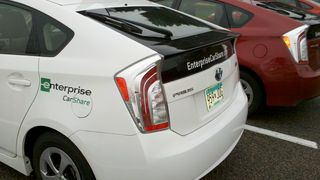 This week mainstream Republicans started to take out the "Tea" in their Party. They challenged, with money as well as moral support, Tea Party candidates. In 2016 they will regain control of their Party. In 2020 GOP will win the White House.

Here's an example of why this is good for the country. Before 2010, train advocates unanimously praised the bi-partisan support they had for trains. And by 2020 both Republicans and Democrats will support trains and funding a passenger rail infrastructure.  And that's good for the country and Gen Y— the future of our country.

Beginning of the end — of autos. Above, the first car share cars I have seen in our small town. Some 100 years ago the first autos appeared in small Midwestern towns like ours, and within 0 years autos had beat out the horse and buggy.  Within 10 years, trains will beat out cars, with car sharing contributing to the decline in driving and car sales.