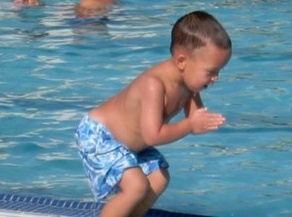 When on a visit to a free family night at the Johnson Pool in 2011, the City of Roseville Parks and Recreation Supervisor found that of the 150 or so people attending the family night, most didn’t have proper bathing suits.

The majority of the kids just got out of the pool and left, without a towel or changing. The Recreation Supervisor saw that there was a clear need and got the ball rolling. She sent out a request to the Parks, Recreation, and Libraries staff for used swimsuits that their children had outgrown and the donations started pouring in.

Over 100 suits and 45 towels were donated, and the majority of them were new! The kids were shocked and thrilled with the new swimsuits, but even with all the donations from staff, there still wasn’t enough. This lead to the birth of “Operation Swim."

After the initial donations from the staff, the program really took off. In 2012, the Parks and Recreation staff reached out to the community for donations and bins were placed in eight public facilities to make donating easy. Monetary donations were also encouraged and were accepted at any of the Parks and Recreation Departments’ offices. Even one of the morning exercise classes for seniors became really involved and raised $1,000. The community really embraced Operation Swim and continued to expand its ability to reach more kids, but it didn’t stop there.

In 2013, the success continued with partnerships from Rotary, Soroptimist, and Emblem Clubs, as well as a $5,000 donation from the Sierra Nevada Swim League. The Roseville Community Benefit Grant and the Community Development Block Grant also approved grants for Operation Swim and provided over $14,000 between 2012 and 2014. Local business and clubs also donated over $23,000 during the same time period. The outpouring from community members, businesses, and larger organizations was astounding and provided Operation Swim the opportunity to succeed.

Since its inception, Operation Swim has grown from handing out 105 swimsuits in 2011 to 479 in 2014. They have also provided free swim lessons to 428 children since 2012. Swimming is not only a refreshing summer activity, but it is a potential life-saving skill that these kids would have otherwise never learned. Through Operation Swim, the City of Roseville, Parks, Recreation, and Libraries was able to identify and address a community need. By addressing this need, they have strengthened the community overall and provided kids with a fun summer experience and a lifesaving skill. For these reasons, LERN is proud and excited to present the City of Roseville, Parks, Recreation, and Libraries with the Award for Outstanding Programming!